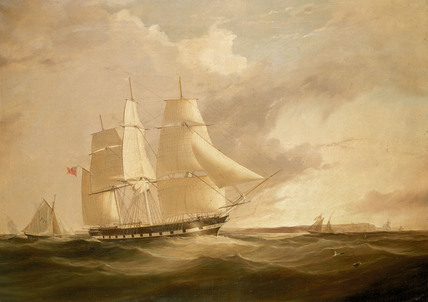 A portrait of the 850 tons ship, Sir George Seymour, built in Sunderland in 1844, owned by Somes Brothers and registered in London. She is shown sailing down the Channel with other shipping with the coast in the background. The ship may have been named for the admiral Sir George Francis Seymour 1787-1870. She was involved in taking emigrants to Australia and New Zealand in the middle of the 19th century.

The Sir George Seymour, set sail from Plymouth on January 9, 1849 carrying 302 assisted immigrants and assorted cargo to Port Henry off Geelong, Victoria, Australia. The immigrants were predominantly English with a few Irish also on board. The Sir George Seymour was one of 10 vessels simultaneously preparing to take 1000 English women to Australia departing in the same week. While preparing for the departure the ship’s mail, including the ship’s “bills of lading” was stolen from the train delivering it. Consequently consignees of cargo were significantly inconvenienced when the ship arrived in Geelong. After 5 days of extremely rough weather the ship’s surgeon advised the captain to pull in at Falmouth, around 60 miles from Plymouth. In this early stage there were deaths mainly amongst the children. The passengers housed during the layover in the Emigration Depot before the ship resumed its voyage to Australia. It anchored off Port Henry on May 14, 1849 – a voyage taking in total 105 days. While 9 babies were born during the voyage (George Seymour Wagland) there were also 20 deaths on board mostly resulting from the extreme weather at the start of the voyage. Otherwise the passengers arrived in Geelong in good health. When the ship anchored off Port Henry a steamer Thames ferried the immigrants to the pier in Geelong. After leaving Geelong the Sir George Seymour sailed into Melbourne on June 1, 1849. It left Sydney on July 3 bound for Singapore and Calcutta on its homeward voyage. (Information supplied by Mr Robyn McCormick, taken from the newspaper reports and the Land and Immigration Commissioner’s (Mr. Addis’) report on the ship’s arrival, Victorian Public Records Office, VPRS115, P0000, 1849/72)

The Sir George Seymour was one of four chartered ships leaving England in September 1850 for Canterbury, with the Randolph, the Cressy, and the Charlotte Jane. They were under the auspices of the Canterbury Association which envisioned the founding of a church settlement in New Zealand. It was hoped that a cross-section of English society including bishops and gentry, artisans and labourers, would journey to this new colony together. They hoped they could take traditions and loyalties to colonial soil, to start a new England that would resemble every good feature of old England. Before they left, a public banquet and dance took place on board the Randolph for the families who were buying land in the new settlement and a church service was held on 1 September in St Paul’s Cathedral for all the Pilgrims. The two main groups of Pilgrims were the colonists and emigrants. Colonists were men who were able to afford to buy land in the new settlement. These men and their families travelled as cabin passengers. They would be the leaders of Canterbury for the first years. The emigrants were farm workers, labourers and tradesmen, travelling in steerage. Their passage was either paid for by the Canterbury Association, or by their future employers, travelling in the same ship. Life on board ship was a dramatic change in lifestyle for these intending settlers and accommodation below decks, for the steerage passengers, was particularly cramped, the Sir George Seymour carried 227 on this trip. [updated 19/09/2014]